“ A wonderful experience, a true journey into the flamenco spirit” - LICA 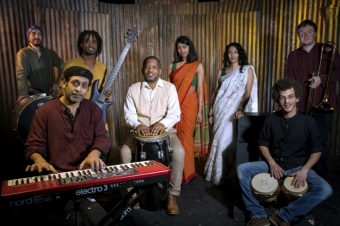 festival of world and roots music

Ipswich's annual free festival  of world music is coming up with The Mad Marching Hare Band parading through the park, free dance workshops on Christchurch lawn with Dance East,  international food stalls, and of course 3 stages of world and roots music.

On the Peppery Stage our line up is

LOS CHARLY'S ORCHESTRA at 1.15
Nuyorican disco band who combine a retro and exhilarating modern sound. Stirring the musical melting pot, they craft their unique fusion out of Afro – Latin beat, Latin Jazz and disco funk.
ZONG ZING ALLSTARS at 2.45
9 piece band playing uplifting dance music called 'Cavacha' - the core rhythm of Central African music that has given rise to ‘Soukous’ in the Democratic Republic of Congo, ‘Makosa’ in Cameroon and ‘Coupez Decallez’ in the Ivory Coast.

With bicycles as lighting stands and a stage set carried in panniers, this will be a truly intriguing concert of beautiful guitar music.

Richard Durrant is a world class performer traveling in excess of 35,000 miles each year. As a concert guitarist he finds it impossible to do anything but cast a carbon footprint as large as his musical status.  But now its pay back time.

During May and June Richard, the leading guitarist of his generation, will play at UK venues great and small during a seven-week, 1,000-mile odyssey that will be the last word in eco-friendliness.  Cycling up to 50 miles a day, Richard will be carrying his entire show on his bike. Each performance will still feature beautiful lighting, projections and sound, but the gear will be state of the art, low energy and lightweight. Richard will be performing a selection of guitar solos, many from his latest album Cycling Music.

"If you don't start to move to this there is no hope for you" (Sean Rafferty, BBC Radio3)